Education is essential for the full exercise of citizenship, which makes the introduction and approach of subjects related to climate change, and the preservation of the environment in education at all levels, strategic issues for Brazil in these times of planetary emergency. Only with access to quality environmental education will Brazilians be able to decide with conscience, wisdom and sovereignty the paths of the country for the transition towards a green and sustainable future in the economy. This was the summary of the debates and the conclusions of the 23rd edition of the “Sustainable Future Dialogues.” This is a project coordinated by the Institute for Climate and Society (iCS) in partnership with the German Embassy in Brazil and the Consulate General of the Federal Republic of Germany in São Paulo – with occasional and special support from the Unibanco Institute for this December edition.

Ana Toni, executive director of iCS, pointed out that, “in the last four years, Brazilian civil society has been the true diplomat of the climate, representing Brazil whether here, with these partnerships, or at the COPs (the annual conferences of the United Nations Framework Convention on Climate Change). The feeling we have is that education, in Brazil, has not yet embraced the climate issue, and the climate field has not yet embraced education.”

The special representative for the International Climate Policy of the Ministry of Foreign Affairs of Germany, Jennifer Morgan, reinforced the urgency of combating climate change, emphasizing the central role of young people. “We can only achieve globally what we manage to do locally, and that is where education and empowerment definitely come in,” she said. She later quoted parts of the speech by the Secretary General of the United Nations, António Guterres, at the opening of the recent COP-27 in Sharm el-Sheikh, Egypt, where he warned that the world is “on a highway to climate hell,” and with the choice of “cooperate or perish.” “I would add that we have the choice of shaping a just economic transformation towards an egalitarian and sustainable zero carbon future by creating this future together.”

The meeting was also attended by Ilka Hirt, the undersecretary for International Affairs of the Ministry of Environment, Nature Conservation, Nuclear Safety and Consumer Protection of Germany; Ricardo Henriques, the executive superintendent of Unibanco Institute; Dácio Roberto Matheus, vice-president of the National Association of Directors of the Federal Institutions of Higher Education (Andifes) and rector of the Federal University of ABC (UFABC); and by Telmiston Pereira Carvalho Filho Guajajara, the director of Culture of the National Union of Students (UNE) and is indigenous. It was mediated by Marina Marçal, the coordinator of the iCS Climate Policy Portfolio.

Watch the seminar in full. 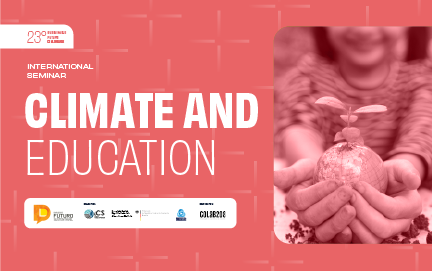