The book “From hunger to hunger: Dialogues with Josué de Castro” is launched at the Faculty of Public Health at USP. Today, 33 million people go hungry in Brazil

In Brazil today, the scenario is staggering: 33 million people are experiencing hunger, while more than half of the population faces some type of food insecurity. Meanwhile, agribusiness is breaking records for crops that do not improve the scenario, and also result in deforestation and fires, land conflicts, attacks on native peoples and traditional communities and contamination by pesticides, among other diverse impacts. In order to help build a multidimensional narrative on the subject, the Cátedra Josué de Castro of Healthy and Sustainable Food Systems at USP started from the work “Geography of Hunger” by Josué de Castro (which completed 75 years in 2021), and organized a process of reflection. 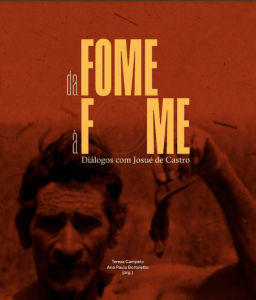 Among the activities is the production of a book entitled “From hunger to hunger: dialogues with Josué de Castro,” which was launched in July. At the opening of the launch event, the full professor of the Cátedra Josué de Castro and former Minister of Social Development and Fight against Hunger, Tereza Campello, explained about the construction process of the book, beginning with the seminar “Geography of Hunger, 75 years later: new and old dilemmas,” promoted by the Cátedra at the end of 2021.

“There was a common feeling that the reading that was being carried out mostly regarding the problem of hunger was superficial and insufficient to account for what was happening and what had motivated the return of Brazil to the Map of Hunger. What united us around the construction of the seminar and the book was the need to delve deeper into the debate and offer an effective diagnosis regarding the set of determinants of the return to hunger in Brazil. The 27 authors offer us complex and multiple viewpoints about the phenomenon of hunger, recovering the effort that Josué de Castro had already made in 1946, saying exactly this: we cannot look at hunger only from the aspect of nutrition; we have to look at the geography, the economy and look at the whole set of aspects,” says Campello. Watch the launch here.

“From hunger to hunger” has a printed version, available on the website of Editora Elefante (here); and a digital version – with free and open access – that can be accessed here.