Black women at the center of the social, political and climate debate

Black women at the center of the social, political and climate debate

The torrential rains that ravaged the northeast of Brazil in recent weeks have left more than a hundred dead. A common factor among almost all of those who lost their lives, the color of the skin: black. There is no doubt that tackling climate change will only be effective if it is carried out with racial and gender justice. Therefore, it is fundamental that black women have spaces in politics and in decision-making, generating positive impacts and visibility.

Helen Nzinga has a story to tell. Born and raised on the Fazenda Coutos, which is a vulnerable and violent community in Salvador, Bahia, she learned how to be an entrepreneur from a young age with her grandmother, while accompanying her to her flour stall at the local market. “Sometimes she would disappear for a while and I would be left alone. I felt very powerful with this,” she recalls. With an ever-present sense of ownership and empowerment, she had the idea of creating a company to manufacture biodegradable menstrual pads after meeting a woman without the money to buy one at a pharmacy.

“Sustainability came into my life by chance. I realized that there are women who do not even have access to the possibility of looking after their menstrual cycle, and that, on average, each one of us uses 10,000 to 15,000 pads during our lives, which take about 10 to 15 years to decompose,” she explains. In this way, Ecociclo was born, which is an e-commerce of sustainable products made by women that today has won many awards – including the Global Competition for New Business – ClimateLaunchpad, held by Climate Ventures with the funding of iCS, in the Brazilian and regional stages (the Americas and the Caribbean) in 2020, guaranteeing international acceleration at Climate-KIC, which is the largest green business accelerator in Europe.

At Ecociclo, Nzinga understood the concept of sustainable development, learned about climate change and took on new challenges, such as her current position as a consultant for the advocacy of black women in the agenda of Climate Change of Criola, which is a non-profit organization that has existed for almost three decades.

Hellen currently coordinates the course “Black Women building the Future with Climate Justice,” which trains 30 young and adult, cis and trans, black women in an intersectional approach to deepen the causes and consequences of the phenomenon of climate change, suggesting paths that consider diverse groups. The classes, which are live and free, are taking place between April 27 and July 4, in an online format. 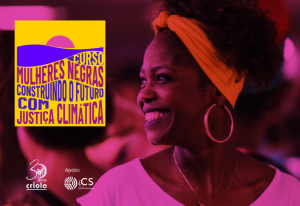 The initiative has the support of iCS and forms part of a series of actions by Criola in the project that works on the participation and political advocacy of black women in the debate on the climate agenda. The program of 11 modules and 40 hours encompasses a series of themes, such as environmental and climate racism, the impact of climate change on motherhood and reproductive health and the national and international strategies to combat the problem.

“We asked the participants from the course what they thought about doing with this knowledge. To our surprise, many of them had ideas for local action, a replication of the information, action to introduce the climate issue to the center of the debate and some are already working in the environmental area and want to delve deeper into the climate issue. Many are upset by the floods and storms that are happening,” comments Lúcia Xavier, the general coordinator of Criola. “They look at the cities where they live and begin to understand more about housing policy and the master plan of their municipalities, for example,” she adds.

One of these women is Angela Faria Benedita Bahia de Brito, who is a 76-year-old meteorologist with a degree from the Federal University of Rio de Janeiro and is a 66-year participant in the black movement. A retired university professor from the Federal University of Alagoas, where she lives to this day after working in power plants in the south of Brazil, she learned about Criola almost twenty years ago, during a course on health for black women. A student of the current training, Angela also comments on the current extreme weather events. “In Alagoas, it rained more than 200 mm in two or three days. Here in the northeast, it rained in a few days what was expected for the whole month,” she says.

For her, it is fundamental to protect black women, who are at the bottom of the pyramid, teaching them to demand quality public policies, “and not only the alarms and sirens that the city halls and governments implement in civil defense. They have to understand the technology, the security and have the chance to be climate activists,” she adds. Experienced and attentive, Angela also maintains that the State omitted to act during the years of the pandemic, which was “a pandemic of black genocide,” she says. “The Sustainable Development Goals establish equity, the eradication of poverty and education. We are seeing that the eradication of poverty has come to nothing, and education as well.”

The advocacy of women in politics also gains practical frameworks in the work of the Alziras Institute, which is the result of the concern and discontentment with Brazil’s position in relation to gender representativeness in politics in comparison with other countries in the world, precisely at a time when the first female president of Brazil was removed from office. With the support of iCS for the structuring of the NGO, Alziras embarked on the mission of producing important research to understand the gender violence in politics, the financing of campaigns and the functioning of political parties, among other projects. In this way, it made perfect sense to not only add issues related to climate change, but also to observe the way in which the global governance of the climate ended up in the hands of the municipalities.

Years later, the Institute is proud to have carried out the first mission to Germany with Brazilian female mayors, in 2018, in order to exchange experiences and observe local projects of adaptation and mitigation, in addition to representations at the COPs and other national and international cooperation events and meetings. The results are tangible, in theory and in practice. The Census of Brazilian Female Mayors, for example, mapped which female mayors were prepared for climate agendas. There are now education and training projects for the city halls on budget issues, which lead to an understanding of how to raise funds from the federal government and international cooperation organizations in order to implement public policies of climate mitigation and adaptation.

In the local scenario, the municipalities run by female mayors who participated in the training and missions with Alziras saw results on the ground, such as Quissamã (RJ), with the expansion of the cycle path network, and on the roof, with the implementation of solar panels on the public buildings of Dois Irmãos, in Rio Grande do Sul. Palmas, the capital of Tocantins, is another city engaged in the agenda and is in the process of finalizing the Green IPTU. There are many good examples.

“Today we are working in three areas: the expansion of women’s access to politics and the training of candidates to be free from violence and with a climate perspective in the agenda; and, once they are in a position of power and decision-making, to monitor how the formulation of public policies is taking place. In other words, for example, what difference does it make for a black or quilombola woman to be in charge of or participating in public management projects, and what is the impact of this in practice? For example, there is evidence that, in the municipalities run by women, there were 40% fewer deaths from Covid-19,” explains Marina Barros, the co-founder and co-director of Alziras.

If you are not sure about where the Institute’s name came from, the creators explain this on their website: Luiza Alzira Teixeira Soriano was the first woman to win an election in Brazil and was the first elected female mayor in Latin America. A widow and mother of 4 daughters, she ran in the municipal elections of Lajes-RN three years before women won the right to vote in Brazil. She was elected with 60% of the valid votes and took office in 1929.

Kigali Amendment is approved in the Chamber of Deputies

Escolhas proposes a 13.5% reduction in the average energy tariff to the Senate

In the last 22 years, air pollution in São Paulo is above the WHO recommendation