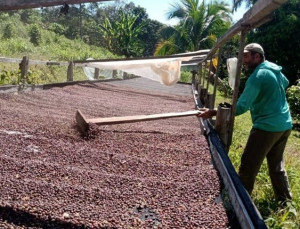 The farmer Moisés Anghinoni started working in the harvest at a young age, in Rio Grande do Sul. He traveled around the country until he settled down in Apuí, in the south of the Amazon, at the beginning of this century. Six years ago, he embarked headlong in a new project of agroforestry and organic coffee. His view of planting gained, in practice, new values. “Without poison, we can see that the earth has life,” he said. For him, the actions of the present bring a perspective of a better future. “Even without pesticides, it is possible to kill the insects that destroy the coffee and provide gains by preserving the forest and also the health of my family. We eat what we plant,” recalls 55-year-old Moisés.

Mr. Moisés is one of the small farmers of Café Apuí Agroflorestal, which is a product of the company Amazônia Agroflorestal, a project created by the Institute for the Conservation and Sustainable Development of the Amazon (Idesam), with the support of partners such as the Institute for Climate and Society (iCS). Developed in Apuí, the second most affected municipality by deforestation in the state of Amazonas, the company seeks to strengthen a low carbon economy and presents an economic alternative for the population of the region while, at the same time, restoring and  regenerating the forest. 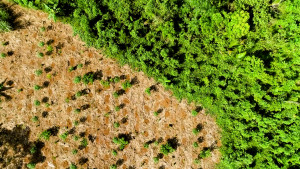 Aerial photo shows the beginning of the agroforestry system with the recovery of a degraded area in the Apuí region. Credit: Moisés Dias/Idesam

The project recognizes the importance that the producers have in the conservation of the local environment and demonstrates that the economy of the standing forest is viable. Last month, the company raised investments of R$ 11 million to expand the production sustainably, through a partnership between Idesam, Amazônia Agroflorestal, Mirova Natural Capital and Axcell. The expected return of investment is in carbon credits, by the avoided deforestation, to Mirova. This contribution will be fundamental in making the entire operation viable. 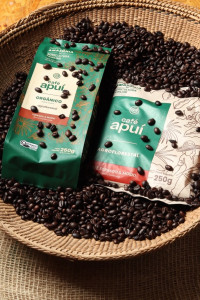 “Monetizing an asset that is generated by forest restoration is not easy. It was only possible to close the account through the carbon credits. The operation until now had been financed by philanthropy. Carbon was the enabling factor for the model as a whole. The bank credit rates do not support crops that need long-term investment. Therefore, the producers end up opting for cattle breeding, which requires low investment,” explains Mariano Cenamo, the director of New Business at Idesam, which started the Café Apuí Agroforestry project about 10 years ago. For him, when a profitable alternative is presented to producers from the region, the convincing takes place. “It’s a win, win situation.”

Mariano Cenamo lists three fundamental fronts for the success of the company: the environmental, social and economic impacts. Café Apuí Agroflorestal develops an agroforestry system in degraded areas, prevents the expansion of the deforestation and promotes the generation of income for low-income farmers. For the municipality, based on the agricultural and cattle breeding economy, it also introduces new perspectives by driving a regenerative economy.

According to Sarah Sampaio, the leader of Café Apuí Agroflorestal, the model can serve as an example to other initiatives in the region. “The actual company is sustaining itself with the regeneration of the forest and helping the farmers shows that it is possible to be an example to other companies about how to have a business and to prosper with a socioenvironmental impact,” she comments. 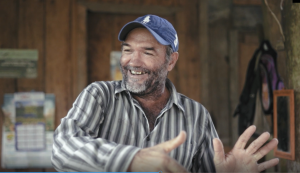 “Without poison, we can see that the earth has life,” says Mr. Moisés Credit: Idesam

Sarah explains that the company is structuring the payment for environmental services of carbon credits, by the avoided deforestation. The proposal is that the producer can have two sources of income: with the coffee and also by maintaining the standing forest.

Café Apuí Agroflorestal currently benefits 57 families. With the injection of capital, carried out with the company Amazônia Agroflorestal in partnership with Idesam, more than 300 families will be included in the cultivation of the coffee in Apuí, in the south of Amazonas.

The investment will allow for the increase of the production to more than 12,000 bags of agroforestry coffee per year, which represents a significant growth in comparison to the production in 2021, which was 231 bags. The possibility is also foreseen of expanding the basket of products and reaching new markets with the strengthening of the presence in e-commerce. Café Apuí Agroflorestal emerges as an alternative model to the deforestation for the creation of pasture. It uses an agroforestry system, combined with other species, generally the native trees of the region. 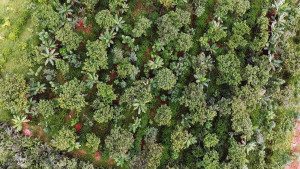 On the farm, Mr. Moisés mixes, in the agroforestry system, native species, such as andiroba, açaí and cocoa, with the plantation of the coffee Credit: Idesam

Largest coffee producer in the Amazon

Currently, Apuí is the municipality that produces the most coffee in the state of Amazonas, with a great potential for expansion. Café Apuí Agroflorestal is the first coffee produced sustainably in the Amazon, since 2015. The shaded plantation, in the midst of trees, generates more quality and flavor for the coffee. In addition to being sold in Manaus, Café Apuí Agroflorestal is available for sale in Rio de Janeiro, São Paulo, Florianópolis, Porto Alegre and Curitiba, as well as in e-commerce stores such as Mercado Livre and the website of Amazônia Agroflorestal.

The history of Café Apuí AgrofIorestal began through a partnership of Idesam with small farmers in Apuí, who were willing to try a new production model. Among them, Mr. Estevão José Anguinoni, 63, who planted roots in the region in the late 1990s. Today, he is the local roaster of the agroforestry and organic coffee. “This technique is the future for protecting the Amazon. I am hopeful that Brazil can encourage the carbon credits and provide more return to those who invest in the standing forest,” states Mr. Estevão.

Climate litigation for the preservation of the Amazon

At the end of March, the Federal Supreme Court (STF) began the judgment of seven actions, known as the judgment of the Green Agenda. Six of these actions concern the Amazon.

Justice Cármen Lúcia, the rapporteur for six of the seven analyzed cases, ordered that the federal government submit, within 60 days, a plan to combat deforestation that is equivalent to the Action Plan for the Prevention and Control of Deforestation in the Amazon (PPCDAm) and declared an “unconstitutional state of affairs in environmental matters in Brazil.” Cármen Lúcia accused the Bolsonaro government, on March 31, of promoting a “silent and invisible extermination of the inspection and control bodies of the environment.”

Here is a summary of the six actions:

The plan involved three main areas: territorial land planning; environmental monitoring and control; and the promotion of sustainable production activities. After its implementation, deforestation went from 27,000 km² in 2004 to 4,500 km² in 2004.

The petition claims that the operation and the use of the Armed Forces as a priority to act against environmental crimes in the Amazon took away the autonomy of Ibama (the Brazilian Institute for the Environment and Renewable Natural Resources), which was scrapped by the Bolsonaro government.

The exclusion took place in February 2020. The FNMA is responsible for the promotion of the development of sustainable activities in the country, with the distribution of funds raised in the forest concessions.

The complaint was filed in 2019, with the accusation of omission in the fight against deforestation in the Amazon by the Federal Government. The text suggests a set of actions to address the issue, such as the full execution of the budget of the environmental agencies, the preparation of an actual contingency plan for the loss of the forest and the hiring of new teams for inspection actions.

The Amazon Fund was created in 2008 in order to finance projects to reduce deforestation and for its inspection. However, it has been frozen since April 2019 by the Bolsonaro government.

Published in 2021, the MP changed the legislation for environmental licensing and established the automatic concession (without any human analysis) of operating permits and licenses for all medium-risk companies.

Kigali Amendment is approved in the Chamber of Deputies

Escolhas proposes a 13.5% reduction in the average energy tariff to the Senate

In the last 22 years, air pollution in São Paulo is above the WHO recommendation