Strategic litigation for the rights of indigenous peoples

Strategic litigation for the rights of indigenous peoples 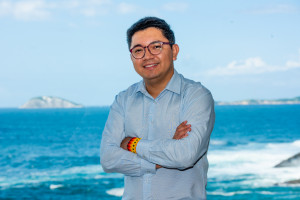 The first indigenous woman to advise the president of the TSE is participating, with lawyers from other villages, in a training laboratory, promoted by iCS

In an election year, the news reports have an almost omnipresent name: the Superior Electoral Court (TSE). What few people know is that, among its staff, there is the first indigenous woman to advise the president of the court. Samara Pataxó, of the Pataxó People of Bahia, from the Aldeia Coroa Vermelha, has many stories to tell, but one of them shines a different light. “I am very proud to say that I studied at the indigenous school of my village. This is very important because we not only learned to read and write, but we also received an upbringing to grow up engaged in the fight, to understand that we need to fight for our rights, to maintain our culture, and to have the certainty that I could go to university.”

As you can imagine, she not only went to university, but also graduated with a degree in Law from the Federal University of Bahia. Samara explains that her bilingual (with a space for the strengthening of the indigenous language), intercultural and community education were fundamental for her to develop a passion for the collective rights to the land, health and education, for example. However, she was also inspired by something else.

“At the time when the trial of the Raposa Serra do Sol was in progress at the Supreme Court, I saw Joênia Wapichama, who is now a federal deputy and is a lawyer. She was the first indigenous lawyer to present an oral argument to the Federal Supreme Court (STF), defending the rights of the Raposa Serra do Sol and its peoples. That image caught my attention, and not only mine, but that of everyone who was going to university at the time. That’s when I became certain that I wanted to study law,” she explains.

This was not the only meeting that helped on her trajectory for the rights of indigenous peoples. Eloy Terena, from the Terena People, is originally from the Aldeia Ipegue, which is located in the municipality of Aquidauana, in Mato Grosso do Sul. He has a degree in Law and a post-doctorate qualification from France. Terena started campaigning early on for the Terena Council, an organization of his people, until leading the legal body of the Coordination of the Indigenous Peoples of Brazil (APIB) and the Coordination of the Indigenous Organizations of the Brazilian Amazon (COIAB).

“As lawyers, we have worked very hard to be intercultural interpreters to bridge the gap between the aspirations of the indigenous communities and the courts. Through our petitions, statements and oral arguments, we have given a voice to the indigenous peoples, which has been denied for a long time,” he says. In 2020, Eloy invited Samara to expand the legal advice of the APIB – she is currently licensed from the position to serve the TSE.

Speaking of oral arguments, the speech by Eloy on March 30 at the STF became well-known, at the time of the ADPF 760, which seeks the resumption of the PPCDAm (Plan for the Prevention and Control of Deforestation in the Amazon). It was the beginning of the Green Package judgment, which joined actions against the environmental and climate dismantling by the government. In his statement, the lawyer highlighted “the essential function of the climate regulation of the indigenous lands, and the imminent risk of the genocide of the isolated indigenous peoples in the country.” In addition, he added, “although the forest is not the home of all Brazilians, one thing is certain: without it, there is no life on Earth as we know it today. And this has an impact on all Brazilians, without exception.”

The two, together with other indigenous lawyers from across the country, participated in May 2022 in a three-day training course at a hotel in Rio de Janeiro to discuss “Companies & Human Rights – Laboratory of Strategic Litigation.” This was organized by the Coordination of the Indigenous Peoples of Brazil (APIB), Amazon Watch and iCS. The event included lectures and panels with experts in different areas of law that were related to the subject of business litigation, guaranteeing a new approach for the indigenous peoples, including international perspectives and instruments. The perception was unanimous: the subject is intense, complex, but fundamental, because it opens new work fronts in the defense of the environment and the guarantees of the indigenous peoples. This is the beginning of a series of works and grants that the Institute for Climate and Society intends to carry out in this sector.

“I was recounting at the beginning of the workshop that five years ago, when Sonia Guajajara and I arrived at the European Parliament for the first time, we even asked ourselves: ‘What are we going to talk about here?’ ‘What did we come here to do?’ We researched the history of the Parliament, which had already passed resolutions and economic embargoes for companies and governments to respect environmental rights and the rights of the indigenous peoples, and this had an important impact on Brazil,” says Eloy.

He explains that, from this point on, they began to map the companies that contribute to the destruction of the Brazilian Amazon. During the event in Rio de Janeiro, therefore, they learned how to handle the instruments of this new litigation, understanding how to file actions against companies both in Brazil and abroad. “We were recently in Switzerland, where we went to meet with the refiners – 70% of all the gold in the world is refined there, as well as 90% of the gold from Brazil. We know that 60% of this Brazilian gold is illegal, because it comes from indigenous lands. We went to ask them for due diligence: ‘the gold that you are refining here is harming our lives and affecting our territories,’” he adds.

Weibe Tapeba, the indigenous leader of the Tapeba people, lives in the municipality of Caucaia, in the state of Ceará, where he is a councilor. In the northeast, he explains, the conflict is old, because there is an enormous incidence of significant real estate developments, resorts and large hotels that occupy areas that are claimed as lands traditionally occupied by the indigenous peoples. “There is also a significant and evolutionary increase in the number, for example, of wind companies, which result in irreparable environmental damage to the territories. We still do not have ways of how we could apply strategic litigation and the object of the course is exactly this.”

In the future, iCS will continue to support the indigenous peoples in their fights for rights, as well as monitoring each detail of the judgment of the Green Package at the STF, together with its grantees.