Learn about the main topics of discussion before Cop 27

Civil society around the world ended the intermediate rounds of negotiations of the Subsidiary Bodies (SBs) of the United Nations Framework Convention on Climate Change (UNFCCC) with a certain frustration at the progress of the negotiations in the German city of Bonn. The need to give the due importance to the discussion of the adaptation to climate change and also to that of loss and damage was made clear – those impacts to which the adaptation measures are no longer applicable. The developing countries and, in particular, the least developed and most vulnerable, raised the issue during the debate over the two weeks of the Conference. However, formally there was no progress in the discussion that has permeated climate negotiations for years: who will pay the bill and how?

The Climate Observatory, LACLIMA, Imaflora and IYALETA summarized their impressions regarding the debate. In all the negotiating agenda items the feeling is the same: we need to speed things up if we want a robust result from the next COP, in Egypt, in November, which intends to be the COP of the implementation. The Egyptian presidency of the COP will have the mission in the coming months to demonstrate its leadership ability to build trust between the developing and developed countries.

What was expected of the SBs was a refinement with respect as to how to actually implement the Paris Agreement, because the “rule book” was closed in Glasgow at COP 26. For example, how to register the cooperation initiatives between countries in order to comply with the Nationally Determined Contributions (NDC), whether through market instruments or non-market approaches (Article 6). There was also an expectation of progress in the monitoring of the implementation – for example, to assess what is being complied with or not, using similar metrics.

On many priority issues, only minimal outcomes were agreed upon. Most of them require new informal meetings and submissions of proposals by the countries to make progress in the debate. In some topics, especially in relation to the global goal of adaptation and the work program in mitigation, there is a risk of starting the discussions from scratch in Egypt, due to the disagreements between the parties.

Priority topics for the presidency of the COP (Egypt)

This will be the COP of the implementation, according to the presidency of the Conference, which will seek to “accelerate global climate action through emissions reduction, scaled-up adaptation efforts and enhanced flows of appropriate finance,” also recognizing that the fair transition remains a priority for developing countries worldwide. For this, it is necessary to take advantage of the political moments between July and November in order to reinforce the urgency of the agenda in the midst of the global economic recovery, the geopolitical turmoil and the different domestic contexts – in the case of Brazil, the electoral period. The thematic days presented by the presidency of the COP – parallel discussions to the formal process of negotiation, with a series of sectoral debates – can also support the relevant dialogues in the implementation of the Agreement.

What was seen in Glasgow at COP 26 as progress – a decision to discuss the creation of a financing mechanism for losses and damages under the UNFCCC – left Bonn with the certainty that, in practice, it will be difficult to implement. There is no clear path to finance the losses and damages, and the topic should continue to be discussed at COP 27. The negotiations also remain on the table about how to operationalize the Santiago Network on Loss and Damage (SNLD) – which will have the objective to facilitate technical support in losses and damages.

It is necessary that the negotiations at the COP progress towards decisions that go beyond the “procedures” of the Convention, and that link the issue of adaptation to climate change to the negotiations related to climate finance and the so-called Global Stocktake, which is the global assessment of the implementation of the Paris Agreement. These should also evaluate the metrics related to the increase of the adaptive capacity of the countries, especially those that are the most vulnerable to the effects of climate change. There is also a need to present a clear path to double the funding for the adaptation, as promised in Glasgow at COP 26.

In order to implement the cooperation mechanisms between the parties (whether market or non-market approaches) established in Article 6, of the Paris Agreement, a significant amount of technical detail is still required. In order for there to be environmental integrity in the transactions between countries, it is necessary to adopt tools for the registration and validation of the transactions.

Many countries have the technological capacity and a robust infrastructure for this and could benefit from previous experiences, such as the Clean Development Mechanism (CDM) of the Kyoto Protocol. However, this is not the case for most countries. Therefore, one of the main discussions in the SBs was how to progress in the implementation of robust tools and, at the same time, technically train developing countries so that the issue of the registration and validation of the credits to be traded is not an impediment to their participation in the markets.

There are also outstanding decisions with a direct impact on Brazil: how the CDM credits will be transferred to this new arrangement; whether and how instruments of “emission avoidance and conservation enhancement” will be addressed, as well as a definition of these terms, which currently does not exist in any UNFCCC decision.

In Article 6.8, which addresses other types of cooperation between countries in order to comply with the NDCs, the main advance was the indication that a platform could be created that presents cases of implementation of mitigation measures that do not involve markets and could be accelerated if executed in collaboration between countries. This could be with technical cooperation, exchange of experiences or funding – the main concern of the developed countries, who argue that the discussion regarding funding should not be included in this topic.

In Bonn, the first technical dialogue was held in preparation for the Global Stocktake, which is the process that will assess the implementation of the Paris Agreement. The next steps and challenges are related to the issues raised in this first technical dialogue about how to assess the implementation of the Paris Agreement and the NDCs, and also the participation of other actors, in a way that also reflects losses and damages, equity, a fair transition and issues such as fossil fuels, ecosystems and human rights. At an event about the topic, which was attended by Marina Marçal, the coordinator of Climate Policy at iCS, experts explained more about the Global Stocktake. Learn more from this link.

The mechanism proposed in Glasgow (MWP – Mitigation Work Program) establishes the acceleration of the mitigation measures in this decade, with more ambition in the NDCs. There was no agreement between the parties about where this work should start, especially due to the discontent of the developing countries in believing that this mechanism alleviates the responsibility of the rich countries and historical emitters. Read more about this in the analysis by the Climate Observatory .

The discussion regarding climate funding is essential in order to build the trust between the parties at all the other points of negotiation. The developed countries have yet to comply with the annual goal of $100 billion for climate funding. A work plan to achieve the objective is being led by Canada and Germany, and it is expected that the next G20 and G7 meetings, in addition to the meetings near to the United Nations General Assembly in September, will provide more information about funding.

The main points of the Koronivia Joint Work on Sustainable Agriculture were the recognition by the parties of the previous discussions about sustainable agriculture and guidance regarding the continuation of this working group under the UNFCCC. Imaflora has an analysis of theresults and the next steps. 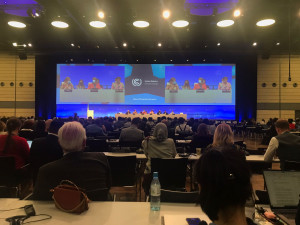