In an online event led by CONAQ and ECAM, the subject was discussed with organizations that work with quilombola communities and encourage productive practices in these locations

The Quilombola Family Farming Initiative (AFQ), led by CONAQ and ECAM, held its first national online event with organizations that work with quilombola communities and encourage productive practices in these locations. Beforehand, there had already been the delivery of the data in all of the states involved in the actions, such as Amapá, Bahia, Minas Gerais, Paraíba, Rondônia, Mato Grosso, Maranhão, Tocantins and Quilombo Mesquita (GO). On July 25, the products made in the Macro Situational Diagnosis of Quilombola Family Farming  were presented and discussed. It is hoped that there may now be an inter-institutional network to strengthen the AFQ, with the intention of promoting quilombola visibility in the agenda of food security and income generation, as explained by Meline Machado, coordinator of the Initiative.

“Our partnership with Conaq began in 2015, when we started working to understand the socio-economy of the quilombolas of the Amazon in six states. We saw that most of the income (49%) came from quilombola family farming, followed by public policies of social assistance, for example,” she says.

With the progress of the project, diagnoses of other cities began to be produced, including in other biomes. During the national webinar, guests, such as Ana Toni, the executive director of iCS, shared their experiences on the subject.

“For iCS, it has been an honor to work with Conaq and ECAM because Brazil still does not recognize the abundance of the work of the quilombolas, the potential of this work, and even less in the area of ​​agriculture. Qualifying the debate and giving visibility with numbers, as they do, is absolutely fundamental. For iCS, which works with society and the climate, it has been very important to support the agenda of the family farming of the quilombolas for many reasons: the social aspect, the guarantee of food in the context of worsening hunger, is fundamental for everyone, but logically for the black and rural Brazilian population; the economic aspect, because many of the diagnoses already point to job opportunities and income for these communities; the defense of the quilombola territories, and the climate field says little about the quilombolas; and, finally, the environmental theme of resilience,” says Ana.

Have a look at other documents generated by the project carried out in partnership with iCS:

Diagnosis – Productivity actions in the quilombola communities of Amapá

Diagnosis – Productivity actions in the quilombola communities of Rondônia 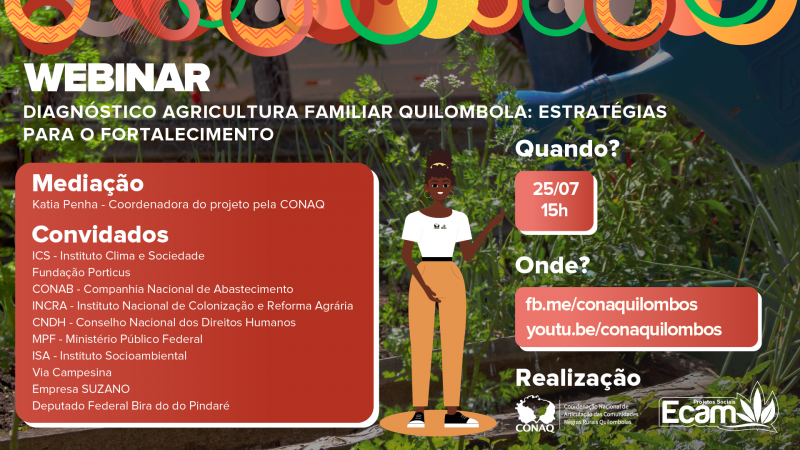