A historic judgment for the climate policy of the country. The Federal Supreme Court decided that the Paris Agreement is a treaty of human rights in Brazil. Ten of the 11 justices from the Supreme Court followed the opinion of the rapporteur, Luís Roberto Barroso, and also ordered that the government, which was considered omissive, release the resources of the Climate Fund, which has an objective to mitigate the impacts of climate change. The action, a victory for Brazilian civil society, was filed by four political parties and had the support of grantees from the Institute for Climate and Society (iCS).

“This has enormous implications for future cases,” assesses Caio Borges, the coordinator of the Climate and Law portfolio of the Institute for Climate and Society (iCS). Caio explains that, in Brazil, human rights treaties have a special legal status. “Unlike other types of treaties, human rights treaties have a ‘supralegal’ status. This means that they are above the “normal” laws in the legal pyramid.” According to him, the decision opens the door to other questions; “Any legislation or public policy will have to be compatible with the Paris Agreement. We’ll have to see what effect this has in the future. But it is already a victory,” he declares.

In his opinion as rapporteur, Barroso expressed his concern with the issue of climate change and stated the following: “The Executive Branch has the constitutional duty to make the Climate Fund work and to allocate the funds on an annual basis, for the purpose of mitigating climate change. Its restriction is prohibited, due to the constitutional duty to protect the environment (CF, article 225), of the international rights and commitments undertaken by Brazil.”

The Action against the Violation of a Constitutional Fundamental Right (ADPF) 708, which was an action that assessed the change in the governance and allocation of funds of the Climate Fund, was filed by four political parties – PSB, PSOL, Rede and PT – in order to oblige the federal government to re-establish the mechanism and to prohibit the restriction of the revenues that form part of the Climate Fund. The Climate Observatory (OC) prepared a technical note about the Fund during the government of Jair Bolsonaro that served as supporting documentation for the action filed by the political parties. In addition to the OC, other organizations such as Conectas, the Alana Institute and the Brazilian Association of the Prosecution Office, which have the support of iCS, provided legal and technical support and acted as amici curiae in the ADPF 708.

“It is a historic and necessary victory,” says Suely Araújo to the OC website, a senior specialist in Public Policy at the Climate Observatory. “This decision, in practice, will have a much broader reach than the Climate Fund: the decision in favor of ADPF 708 sets the fundamental precedent that the omission in the use of funds destined for climate policy is unconstitutional. The government does not have the right to opt for a non-public policy in this field,” she adds.

Another movement played an important role in ADPF 708. The justice rapporteur of ADPF 708, Luís Barroso, called for a public hearing, in 2020, to address the issue. More than 30 people participated, including representatives from civil society and also from the public and private sectors. The book “STF e as Mudanças Climáticas: contribuições para o debate sobre Fundo Clima” [STF and Climate Change: contributions to the debate about the Climate Fund] (ADPF708) includes the contributions made at the public hearing, which was considered a landmark in the history of climate litigation in Brazil.

“It was in this action that the Federal Supreme Court (STF) debated with society and with the federal and state governments, for the first time, regarding the climate dimension of the fundamental rights and guarantees that are established in the Federal Constitution, in the light of the urgent challenges that are being imposed on Brazil in the climate agenda. Among them, the reduction of deforestation in the Amazon biome, the restoration of the degraded forest areas and the reorientation of the sectoral policies (energy, transport and the processing industry, etc.) towards a low carbon economy,” says the text from the introduction to the book.

“In addition to reaffirming climate change as an issue of human rights, this case was decided with substantial plurality and representativeness, which makes this decision even more important,” recalls Caio Borges.

Risk to the population and the future of the economy

According to Justice Luís Barroso, the operation of the fund was resumed “in a hurry” by the government after opposition parties filed an action with the STF. After citing the increase in deforestation from 2019, “the same year as the paralysis of the Climate Fund,” Barroso reported on the current climate policy in the country:

“Therefore, the objectively ascertained results indicate that the country is, in fact, moving in the opposite direction to the undertaken commitments and to the mitigation of climate change. The situation has worsened substantially in recent years. This is the worrying and persistent situation in which the fight against climate change in Brazil finds itself, which places the lives, health and food security of its population at risk, as well as the future economy.”

Luís Barroso also reinforced, that the protection of the climate forms part of the constitutional duty of the Government, as well as the maintenance of a healthy environment and the compliance with the international commitments undertaken by Brazil. 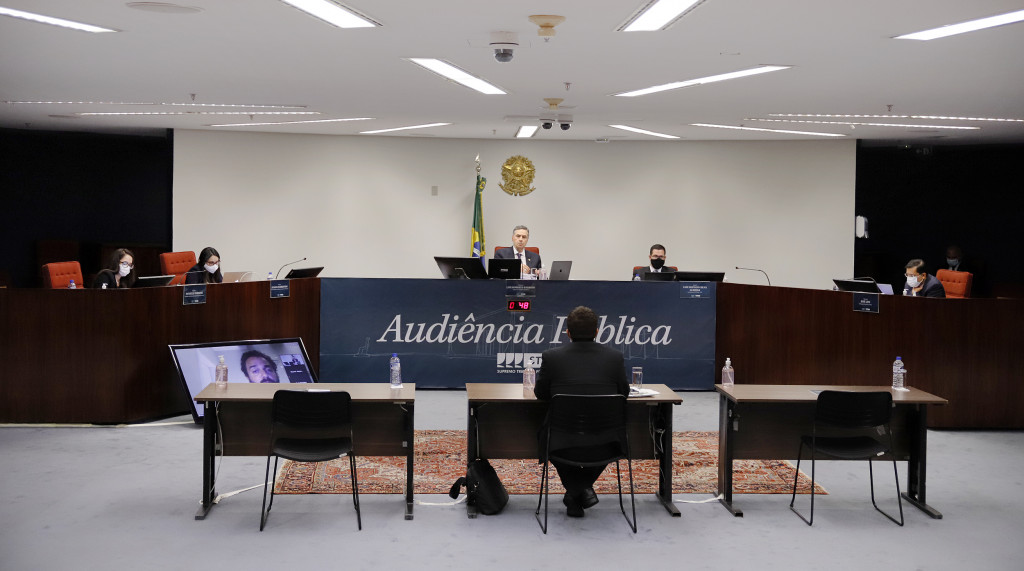 Barroso in public hearing at the STF. Photo: Rosinei Coutinho/STF

Most of the justices followed Barroso’s position in full. Edson Fachin followed the opinion with a proviso: he considered that the government should also be obliged to publish a quarterly report with the transfers, data and statistics regarding the subject. Information should be provided on the percentage of expenditures of the Climate Fund in five segments (energy, industry, agriculture and livestock, land use and waste), as well as a National Inventory of the Emission and Removal of Greenhouse Gases, with segmentation by states and municipalities. The only justice from the Supreme Court who voted against the opinion was Kassio Nunes Marques.