Victory for the climate and Brazilian civil society

On two fronts, entities and organizations combined forces to present the agenda for the climate and the protection of the Amazon in a proactive and stimulating manner to national and regional candidates

Brazilian civil society mobilized itself during the entire year, with a special emphasis on the last six months, in order to strengthen the climate and environmental agenda regarding the policies of the candidates for positions in the 2022 elections. There were two main fronts. The first happened proactively, with the delivery of studies and proposals for government plans. The second stimulated public opinion to raise awareness of the vote and the importance of the environmental and climate causes for the country.

The agenda has never been so present in the electoral debates. President Luiz Inácio Lula da Silva, soon after his victory, made a historic speech in which he highlighted his commitment to the Amazon, the climate agenda and the urgency of the cause.

Among the civil society organizations are iCS grantees and partners. The following are some of those who participated with the delivery of the documents for government plans:

The second front also involved grantees from the Institute for Climate and Society, highlighting: 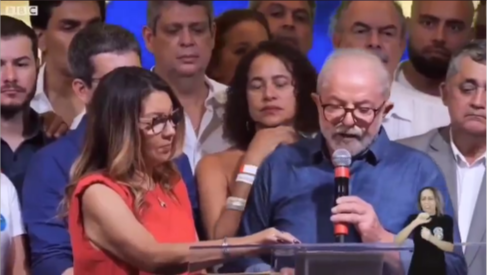 Credit: Image of the speech by Lula broadcast by the BBC